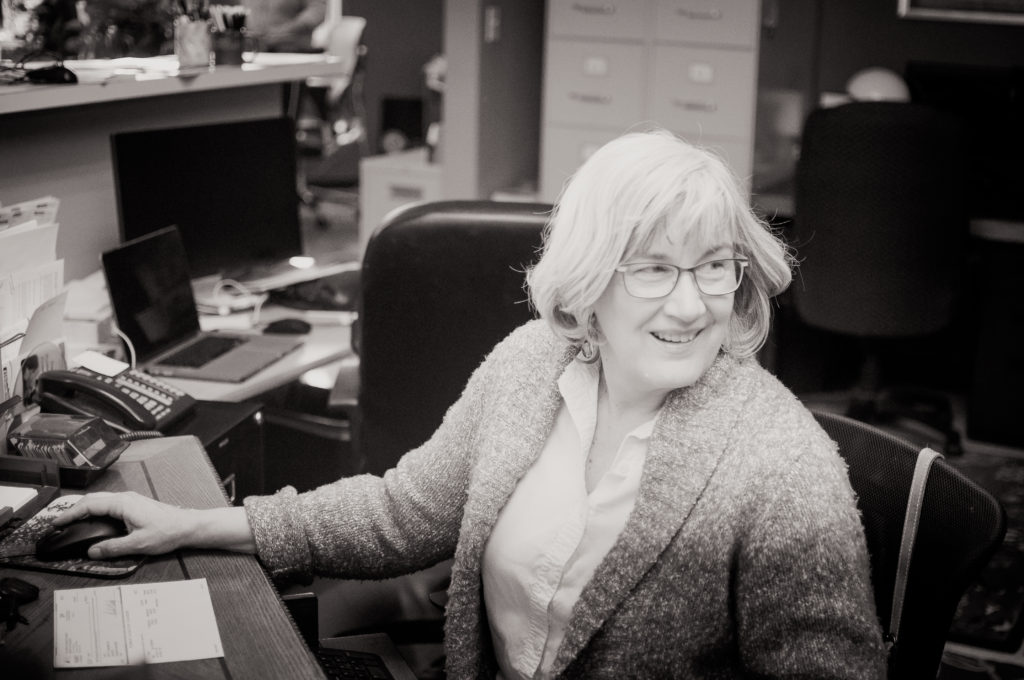 At Artmil, Chris Miller goes by “Chris M” in order to avoid confusion.

Since Chris Beck also works at Artmil, when people call and ask for “Chris” they are usually wanting to speak with him, even though “Chris M” often answers the phone! Chris Miller is Dennis’ wife, and partner in owning Artmil. She serves as Vice President and Bookkeeper along with front desk duties and deliveries.

While her children were young, she served mainly as Dennis’ prayer partner and encourager (plus janitor). In 2001 she began learning the bookkeeping duties, taking on more responsibilities in the office in 2004. Dennis and Chris’ son Arthur joined her at work for part of the day as well in 2004. (See his bio!)

Writing skills developed in college enabled her to contribute to copywriting projects at Artmil. Beyond being yearbook editor in high school and taking art classes in college, she has learned much from living with Dennis. Seeing the world through his designer’s eyes has given her great appreciation for the good work the team at Artmil produces in print and online.

When she’s not at Artmil

Chris homeschooled all of her children until high school, sewing patchwork quilts along the way. She stays in touch with the Miller’s four other children who have grown up and moved away, getting to visit with them occasionally. Two are married; her seventh grandchild will be born soon.

She enjoys writing out ideas that interest her, plus family history. After delightful years singing in choir and musicals in high school, college, and church, she learned to accompany herself on the guitar. She and Dennis sing and play acoustic instruments together in church and at bluegrass jams.

(In no particular order:)

Quote:
“Don’t worry about anything, but pray about everything.”